The first major update of this version is the addition of a pathfinding system. The AI I had was simple. Enemies would move x,y in your direction. I thought it was going to be a headache of a change. Gladly my movement code was quite good. I'm reusing the same behavior for the player and enemies. Now, enemies will pick a path and go in the direction of the next waypoint until they are in range to attack. 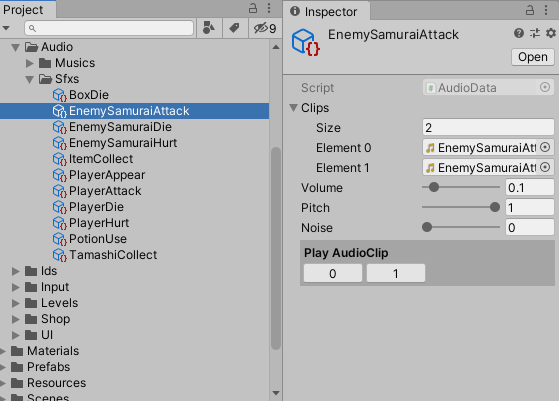 I upgrade my Audio Data class. I can play each entry in the AudioClip array without having to go to the AudioClip itself. Definitely sped up some time.

My camera system also got an upgrade. I added a shake method that allows me to do screen shakes. Also, I added a SnapTo so I can move the camera to the position without any lerp. Useful for restarting or when going between levels.

I wasn't happy with the slight delay it had when turning and attacking. I refactored the input handling and was able to fix the delay. The attack collision also felt odd at times. I was able to improve that by changing the collider size and position when changing

For the next week I want to improve the enemy AI and the FSM I'm using.