This month was quite busy. I'm super happy with how much progress I made.

I usually track the time I spend on the project. For this month I spent almost 60hours on it. I only work on weekends and days off. For comparison, in November, I worked only 18hours.

One thing that kept bothering me was figuring out how much content to build. I took some time and researched similar games.

I came out with a target time of 2 hours for the main path playthrough. With an average of 2.5 minutes per level, if I do 30 levels, I'll end up with 1h and 15 minutes.

So I'm looking into ways to increase the game's duration. Either with more levels or making combat tougher.

For this version, I have the first ten stages. There's a clear progression of difficulty and enemy variation. I noticed that editing the stages on Unity wasn't working quite as well. 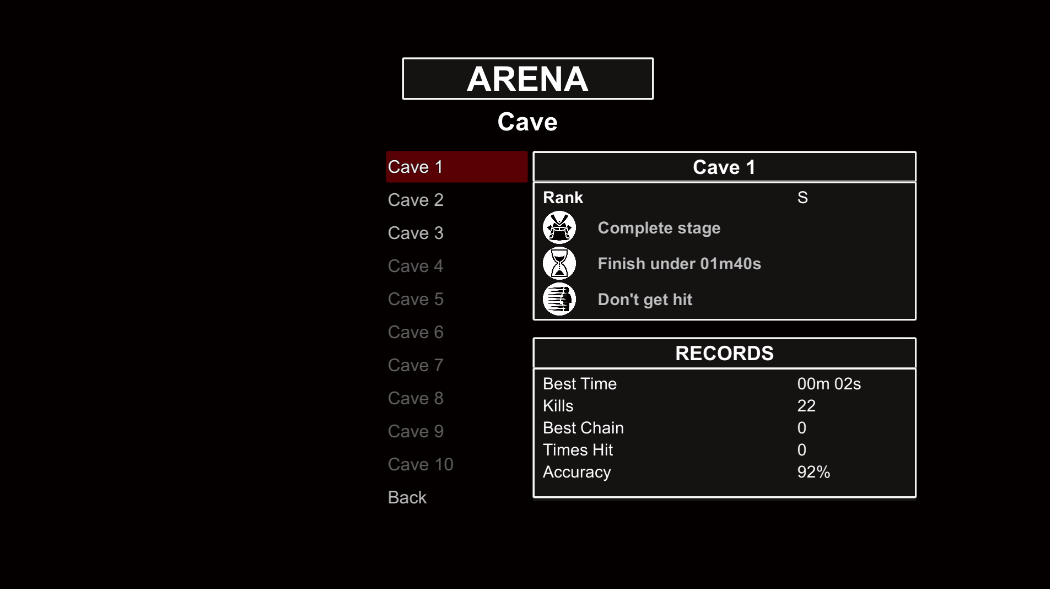 Since I already keep the stages on a google docs spreadsheet for balancing, I made it possible to import that into the game.

I implemented different wave types. One of those is the Hunter. In it, you have to kill a certain amount of enemies in a given time. This allows me to have a stage with a similar number of enemies, but you'll have to play it with a different strategy in mind.

In another mode, you have to kill enemies when they are within a given area. Again, this adds a different layer when playing the stage.

A lot of the UI needs to be improved. I don't want to do it all until I have the rest of the game done. That being said, I made some improvements here and there to get a better-looking UI.

I added the video options to the options menu. Nothing ground-breaking. I did have to make a custom script to get that selection as I wanted.

Last but not least, I reworked the Arena Select Menu. I have a few ideas about how to move this forward. For now, it already looks a thousand times better.

Once again, thanks for reading up until here.